Hi friends, readers, expats! Before I jump into the second half of my long-weekend recommendations, a quick update on my life: I got a job! A real-life, full-time, honest-to-goodness job working as an editor (something I loooovvvvve). A job with a regular paycheck to pay for travel. A job with ample vacation time. I couldn’t be happier! With this latest transition, however, comes fewer blog updates, as I’m sure you’ve noticed. But even though I might not post as often, I’m not going away. (-:

If you caught my last post, you know it was inspired by my friends over at Adventuring Pandas asking me where they should go in 2017. I had more ideas than one post could accommodate, so I broke it into two halves. Voila: the second half! 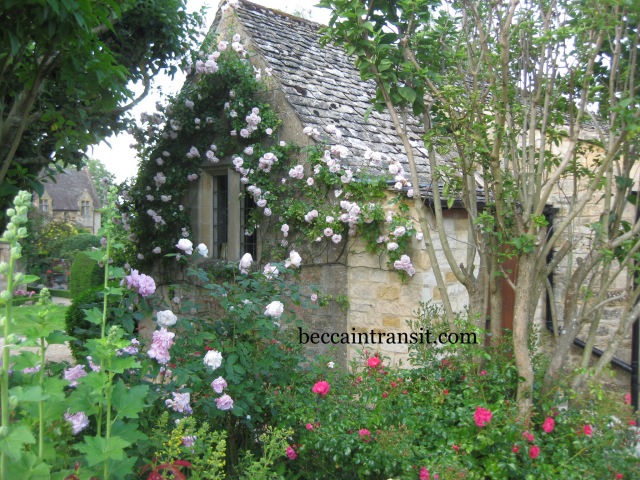 Thanks to overdosing on early-20th-century British literature during my formative years, I came to the conclusion that long-distance walking tours are something every Brit does on her off-time. It turns out that this is untrue in the main, but true enough that England has some marvelous long-distance trails. I spent two days on the Cotswold Way walking the 18 miles from Chipping Campden to Winchcombe all by my onesies.

Besides the fresh air and moving slowly enough to really take in some English countryside (SO MANY SHEEP), there were two main highlights. One was a day in nearby Stratford-upon-Avon touring every location associated with Shakespeare. The other was my room at the Old Post House in Stanton, right beside a sheep pasture and covered with climbing roses right by houses with thatched animals woven into the thatched roofs. Charming doesn’t even begin to describe it.

A few years after my solo walking adventure in the Cotswolds, I took a bike tour in the Scottish hills with my BFF. It was rainy, steep, and horrible in some ways, but so beautiful, so serendipitous, and ultimately, simply magical overall. While you might not want to spend a long weekend biking the Highlands (I wouldn’t exactly blame you), I can recommend a stay in Pitlochry with a day cycling to Blair Castle and the Killiecrankie Visitor Center in one direction, and the Blair Athol Distillery in the other direction.

“Someday, son, all this will be yours.” “What, the curtains?”

We ended our trip in Stirling after a visit to Doune Castle, where much of Monty Python’s Holy Grail was filmed and with the best audio tour I’ve ever had—narrated by none other than Terry Jones. And the nicest people you’ll ever meet hosted us at the Monument View B&B. With views of the Wallace Monument (think Braveheart) out one of our room’s windows and of Stirling Castle out the other, we were well-situated to see the city highlights. Pro tip: Don’t count on there being open lockers in the bus or train station to store your luggage while you tour the city! 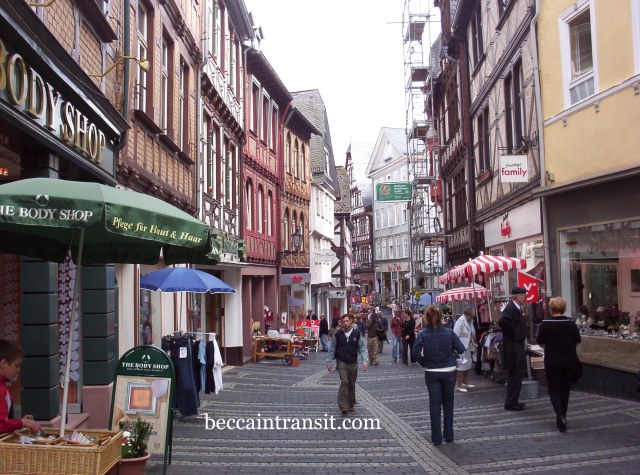 Saving the best for last. Marburg. My home, my love. As you can tell, I wax poetic when it comes to the city where I spent my study-abroad year. With a thriving university and all the social life that comes with it, Marburg has more cafes and bars than you could visit in a month. The town square spreads before the Rathaus (city hall), crowned with a clock that puts on a modest but enjoyable “show” on the hour. Much of the old city is pedestrian zones, and even the parts that aren’t pedestrian-only are certainly pedestrian-ruled. 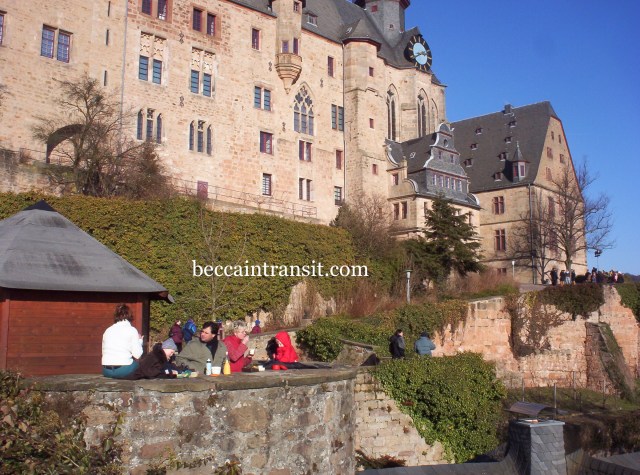 The Brothers Grimm studied here, so while you’re in town, wander along the Jakobgasse (Jacob Alley) to the spiral stair still built in to old city wall, and climb it to the overlook outside the crooked-steepled Pfarrkirche, where the organist often practices in the afternoon. At the top of the hill is the castle—my castle, if I’m feeling proprietary—where Martin Luther and several other Reformers met to hash out some key aspects of the new Protestantism. Check out the museum inside for some more history, or relax with an ice cream in the cafe that looks out over the red tile rooftops.

Wednesdays and Saturdays, an outdoor market fills both the town square and the churchyard around the Elisabethkirche, widely regarded as the first Gothic cathedral. Or simply browse the postcards and knick-knacks in the kiosks outside the shops that line Steinweg. If it’s summer, don’t miss the roses in the Schlosspark (castle gardens) or the Biergartens that pop up along the River Lahn.

2 thoughts on “Where You Should Go: Long Weekends in Europe (part 2)”