Twice during my travels this past month, my ring finger was commented on. 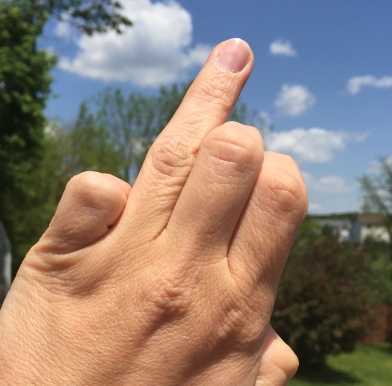 Because that’s a thing strangers get to do, apparently.

The first was on my first flight of the entire trip, when I happened to be wearing no jewelry. After chatting about his granddaughter and my nephew for a few minutes, he nodded toward my left hand and said, “So what are you waiting for?”

What am I waiting for?

The second was at my hosts’ when we had some new neighbors over for the evening. I had dressed up a little, slipped on a Celtic knot ring I often wear. Sitting around the table, the neighbor’s dad, who was in town visiting, nodded at my left hand and said, “You’re an engaged woman.”

I wonder whether men’s jewelry or lack thereof is ever commented on. And while I can forgive both incidents as small talk or outright curiosity (or in the second case, perhaps symbolism for my Celtic knot that I’m unaware of), the fact remains that my marital status is not only noticed and noted. It’s vocally addressed.

I don’t get to be a woman alone in the world without explaining myself.

I don’t get to be happy or miserable or strong or weak or self-possessed or confused while solo without explaining myself.

And while I answered the first man, “I travel too much to have married yet,” and the second, “No, this is just what I wear to avoid people commenting on my marital status,” the fact is, neither of them needed to know.

So what am I waiting for? Nothing, actually. That’s why I travel alone. Imagine what I wouldn’t have experienced if I had waited until I were married to see the world. I’m an engaged woman? Well, sure I am, engaged with the world and experiences around me.

And while I’d love to find a guy who wants to travel with me the rest of our lives, I’m not going to stop doing what I do to wait around for him. This is my life, not a potential “his,” and certainly not the strangers’ who seek an account for existing the way I am.

All I am is unmarried. Is that really so hard to fathom?

8 thoughts on “Traveling While Single”